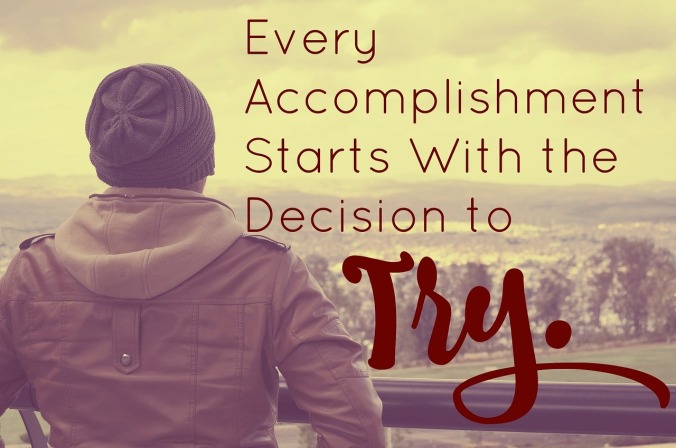 I live in a culture of women who love lists. It seems to have been a recurring theme at my church a lot recently—how women love their lists and checking things off of those lists. It’s just one of many reasons why I feel “different” or like I don’t belong. I’m not a list person—at all. Never have been, never will be. Maybe part of it is that I’m not a goal-oriented person. I used to be, when I was younger. I had a goal to sit as first-chair flute in concert band my sophomore year of high school, and I eventually did. I had a goal to be the flute section leader in marching band my senior year, and I was. I had a goal to graduate high school with high honors, and I did. I had a goal to get a scholarship to college, and I did. I had a goal to get married in the temple, and I did. I also had a goal to graduate college, which I did not do. Okay, I did graduate from a two-year college with an Associates Degree, which did come in handy getting me the best job of my life, as a special needs teaching assistant, years later. But not finishing school with a Bachelor’s was probably the first major goal I failed to achieve as a later teen/young adult. And that’s probably when I stopped setting major goals for myself.

These days, I tend to look at goals as a sure way to set myself up for failure. As someone who struggles with mental illness on a daily basis, as someone who just recently got divorced, I already feel like the most epic failure in the world, so why give myself another reason to fail?

When I first talked to my bishop, the religious leader of my church, about getting divorced, he told me he wanted to talk to me more, through the process, to offer support, lend a listening ear and suggested that he could help me set goals for my uncertain future. I nearly panicked right then and there. He wanted me to set goals? It was a horrifying thought. The last big goal I set for myself was to finish writing the novel I was working on by the end of last year. That was the first time I had set any goal for myself in ages. And I failed. I did eventually finish it, just four months later than I had wanted to.

In the weeks that followed my chat with the bishop, my OCD wouldn’t let me stop thinking about goals. It gnawed at the corners of my mind like a dog slowly chewing a bone. So I decided to experiment on a very small scale. I set a goal for myself to be able to sing all the lyrics to the awesome new Imagine Dragon’s song, Believer—something that would be a challenge, but was doable. It took a few days of listening to the song over and over and over until my kids were probably so sick of it, but now I can sing Believer like it’s my song! I sort of feel like it is—especially when it talks about writing poems! (Due to copyright law, I cannot put the lyrics on here, but you should go and look it up!)

Even though it was sort of a silly goal to set for myself, and I didn’t feel any gushing sense of accomplishment, I did feel good about it. And I proved to myself that not all goals end in failure.

One other goal I’ve had for many, many years—like since I lost my amazingly high metabolism after having a baby ten years ago—is to lose weight. At first, it was just about being able to fit into old pants or a certain size of pants. Then it was about eating better or eating less. Then, when I was about to turn thirty, I gave myself a certain weight I wanted to get to by my birthday. I came to within half a pound of my goal—half a pound! And then I ate some big birthday feast that never seemed to end. I gained thirty pounds back. One day, a friend/neighbor saw me coming out of restaurant and asked if I was pregnant again. I was not offended at all—because she only saw the truth. I did look pregnant, especially after a huge meal of Mexican food! That was definitely the motivation I needed to start toward that weight goal again.

I’ve been working on it for two to three years now, probably. Sometimes I’ve done well, and other times I haven’t. It’s been a long and slow process, but guess what? I finally accomplished it! This morning, when I got on the scale, I saw that number I’ve been wanting to get to for so long. There were no bells or whistles going off, no confetti shooting out, and not even a single other person around to congratulate me. But, wow! It felt good! It felt so good! I did a little happy dance and bounced up and down on my feet! I did it! After making some changes to my life that included my diet and exercise, after a lot of hard work, some up and down times, I finally did it! I achieved success.

Now, I still don’t think I’m going to become a goal-oriented person and definitely not a list person. When you factor mental illness into the picture, sometimes just getting out of bed is a major accomplishment. Just getting your kids clothed and fed can be a miracle. But even if you can’t do that sometimes, it’s okay. Set small goals for yourself, even if they seem silly. When you achieve them, it feels good, and that can lead to bigger things at a later time. One thing I’ve learned in my life is that you can do hard things—maybe not today, maybe not always, but sometime, in someway, someday, you can.

2 thoughts on “Sometimes, You Just Have to Try”

It's not faith if you use your eyes