This is going to be a selfish post. A rant. Because I have to get it out or I might explode.

Every year I tell myself I’m going to help my daughter make a creative Valentine’s Day box for school. And every year I put it off and put it off until it’s too late and end up buying some generic one from Target. It’s her last year in elementary so I actually got with the picture this year. I hadn’t heard anything about Valentine’s parties yet, but every year my daughter has been in elementary she’s made her own box and had a party so I assumed it would be that way again for her and my son who is in first grade. I thought about what they liked then looked up ideas. My daughter loves dragons and my son is really into Sonic. So I found pictures online of Valentine’s boxes of Toothless and Sonic then asked my artistic ex-husband if he’d be willing to make them with the kids if I provided the supplies. He said yes, so over the weekend he made them with the kids. 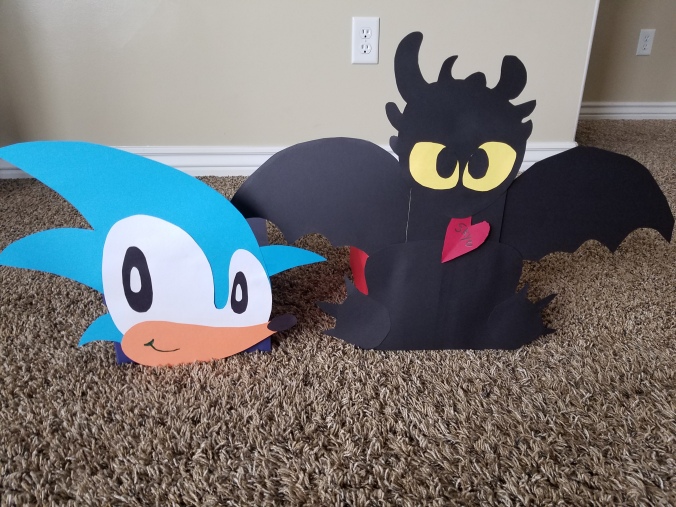 So cute, right? And I was so proud of myself for actually doing it this time and in such a timely manner!

So yesterday, when I picked my kids up from school, my seven-year-old was in tears as he told me he’s not allowed to bring his box to school, that his teacher said if anyone brings a box they will have to keep it in their backpack because they are decorating sacks—sacks!—at school. I understand doing this for preschool, but everyone knows that once you get into elementary school you decorate your own box to bring to school—at least around here! I told my son I would email his teacher to see if there was any way he could bring it.

I sent the email this morning telling her how every year my daughter had been at that school (since kindergarten) she had brought her own decorated Valentine’s box to school, how my son had made the box with his dad, how excited he was about it, how disappointed he was when he found out he couldn’t bring it, then asked if he actually could bring it. The response I got back was that as a first grade (meaning the teachers) they decided on bags so it wouldn’t become a competition with the boxes. Cry me a freaking river! What first-grader even thinks of making it a competition?! I bet you all the money in the world that the majority of kids that age are only thinking of the excitement of dropping Valentine’s and goodies into their classmate’s boxes and then thinking of all the yummy treats they’ll be getting!

The whole situation frustrates me not just because my son is sad and disappointed that he can’t bring the special box he made (he’ll get over it, and hopefully it will teach him some resilience, which I’m all about) but because it’s the whole mindset of the world these days that everyone has to be the same or “equal.” What frustrates me beyond that is the hypocrisy of it at my kid’s school. It is an immersion school. The whole concept of immersion schools is inequality and the “uneven playing field” because not everyone who wants their kid in an immersion class gets it. Priority is given to those who already have kids in it and then it’s just luck of the draw—and if you’re unlucky, too bad! And students who aren’t in immersion aren’t given any other opportunity to “level the playing field.” It drives me crazy that they preach one thing, but don’t follow it.

Now, if it’s actually a matter of low income, that I understand. As someone who has lived at times wondering if I was going to have enough money to buy groceries that week and was only able to afford that generic box for my daughter because of the generosity of kind people who randomly brought us dinner one night or left a box of groceries on our doorstep, I get it! If that’s the case, why not send an email out to parents asking if they’d be willing to donate materials that those kids can take home? I’d be the first to jump in line to help with that!

It’s also ironic that in a couple of weeks the school is having a “kindness” week. Well, give people the opportunity to be kind! Let the students prove that they are kind rather than assuming they’re all going to be mean and make fun of each other’s Valentine’s boxes. I even asked my sixth grader if anyone ever made fun of her boxes and she said no. I asked her if she ever heard anyone making fun of anyone else’s box. She said no, that she only ever heard people compliment and say how cool someone’s box was.

And yet, they’ll stick to their guns. They’ll force the kids to use as little brain power as possible and force them to all be like each other rather than allowing them to use their own creativity and be proud of something they have made.